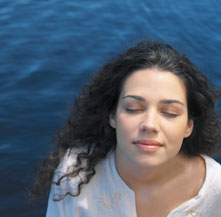 Two world-first studies on yoga in the workplace have suggested that Dru Yoga is highly effective for reducing stress, easing back pain, boosting wellbeing and lifting your emotions and quality of life.

A team of researchers working at Bangor University found that a six week programme of Dru Yoga reduced anxiety and fatigue, while increasing emotional well-being and resilience to stress. An subsequent, larger study, corroborated these findings and added evidence that Dru Yoga is effective for reducing back pain in the working environment.

This research is very timely as latest figures from the HSE suggest that stress in the workplace costs the UK over £530 million per year, which equates to over 13 million ‘lost’ working days. Experts believe these figures will increase further as a result of the recession.

In the first study, Researchers conducted a randomized controlled study, (the first robust research done on yoga in the workplace) involving 48 university employees. They were either placed into a Dru Yoga programme, or wait listed, as the control group. The yoga group participated in a six week programme of Dru Yoga, which involved attending at least one weekly 60-minute class.

The results show an astonishing improvement

Study participant Eileen Price, Undergraduate Recruitment Administrator, said, ‘At the end of the first session I went back to the office with a much clearer head and renewed vigour – I could think more clearly, make better decisions and work more efficiently.’

Researchers concluded that even a short program of Dru Yoga is effective for enhancing emotional well-being and resilience to stress in the workplace, and recommended that employers should consider offering yoga classes to their employees.

Dru Yoga is one of the UK’s most popular forms of yoga, comprising of easy-to-learn flowing movements, simple breathing techniques and effective relaxation methods.

"I hardly recognise myself as the person I was six years ago. The bouts of depression, anxiety and low self-esteem I used to suffer on a regular basis have gone, to be replaced by increasing self confidence and a joyfulness in life that I’d forgotten was possible."

"Dru Yoga is accessible to everyone; you don’t have to be able to do the lotus posture to start to practice."